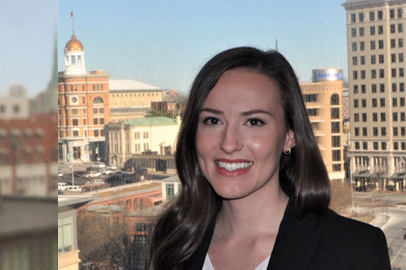 Kelsey Keef is a Chattanooga native. She graduated from Girls Preparatory School in 2012. Kelsey graduated from the University of Tennessee, Knoxville in 2016 with a B.S. in Business Administration and a minor in the Spanish language.

Kelsey graduated from the Cecil C. Humphrey School of Law in Memphis, Tennessee in May of 2019. While in law school, Kelsey clerked for the Honorable Judge Robert S. Weiss of the Shelby County Circuit Court. Kelsey externed for the Honorable George Emerson of the United States Bankruptcy Court for the Western District of Tennessee. Kelsey was a member of the Moot Court Board. She also served as an Oral Advocate for the Duberstein Bankruptcy Moot Court travel team where she won two regional competitions in Las Vegas, Nevada and Detroit, Michigan. Kelsey also participated in Memphis Law Elder Law clinic where she assisted her elderly clients in drafting wills, powers of attorney and petitions for conservatorship.

Kelsey enjoys spending her free time with her family, friends and her dogs.